Here we are, after a successful week of sticking to a timetable! Already, things are looking up.

The subject today is, perhaps unsurprisingly, willpower. I thought I’d share a little bit about what I’ve learned about willpower. Having managed to not slack off in my free time for a week, I am now clearly a paragon of strength in an harsh, unproductive world.

I worry that this is another abortive attempt to kick myself into gear. Indeed, having failed in the past with similar endeavours, coming across this panel from xkcd was bit of a downer: 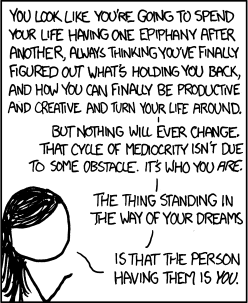 I spend a lot of time thinking about this single panel. Seriously, it’s one of the most horrible things I can think of. But you know, either you eventually figure it out, or you keep trying until you can’t any more. So let’s keep trying (’til we run out of cake)!

What is willpower, anyway? The American Psychological Association partially defines it as “the ability to delay gratification, resisting short-term temptations in order to meet long-term goals”. I’d like me some of that! So I’ve been working on it.

As I said earlier, this past week was really good for sticking to a timetable. I’ve started going to bed earlier, getting into work earlier, and overall ending up with more productive time than I would have by getting in late and staying up late. In a way, 7:30am and 12 midnight have become the anchor points of my day. This brings me neatly to the first actual thing I want to talk about.

The Power of Habits

That’s probably the title of a book by Tim Robbins, but hopefully no one is going to be suing me. But yeah! It turns out that there’s been studies (or more likely, a single study that has been blown out of proportion) that suggest a correlation between building habits and an increase in willpower. The study in question measured willpower as a function of how well the participants performed in specialised tasks before and after starting to visit the gym regularly. I didn’t read it myself, but rather read a regurgitation from the wonderful Jason Shen of the conclusions of the study.

It’s not just people who actually do science for a living who have decided this. Indeed, there are many, many articles out there that claim that you too can become a productivity powerhouse by simply adopting a set of habits, without citing a single academic paper! But science is overrated anyway, right? Just prepare yourself to get things done, and good things will come.

So what habits did I pick up? Well, the timetable itself is a habit, just like going to the gym except a bit larger in scope. It makes it easier in general to get started with things, because you know ahead of time pretty much what you’re going to be doing and for how long. Because I don’t have to think (which is awesome, thinking hurts my drain), I find myself with fewer excuses to not sit down and get started on the task at hand. So that removal of choice that comes with picking up a timetable as a habit.. Definitely seems to help. The results will speak for themselves in a few weeks time.

The timetable itself hints at another key habit I’ve stuck to (mostly, give or take an hour here or there): Regular bed times and regular wake up times. I’ve always resisted bed time. Like, as long as I can remember, I’ve tried to stay up as late as possible. Back at university, it wasn’t uncommon for me to be up at 3am on days where the lectures started late. But in fact, maybe that wasn’t such a great idea. Sure, you stay up later, but you also wake up later. Depending on how much your body likes sunlight, you’ll deprive it of valuable daylight hours where you could be getting stuff done! Also, some things can only be done before it’s too late in the day (for instance, I can’t really play the piano past 10pm. Can’t really play it before 10pm either, bazinga). The main benefit however, is that it’s a habit. You don’t have to worry about wondering what time you’re going to bed (and no, it isn’t ‘when you’re too tired to stay awake’, Old Matt), because when the time comes.. You’ll just go to bed. Bonus: Sleeping at regular times helps your body get more rest, and helps you get to sleep!

Other than the timetable and sleeping , I’ve picked up a couple of other ‘good’ habits: I sit up straight when I catch myself slouching (which apparently has its own benefits). I make the bed! Well, I throw the covers back on the bed and flatten it out a bit. At least it’s more presentable than it usually is. Will these micro-habits help out in the long run? I would guess.. probably not. But I’m not a psychologist or anything, and given how they’re not exactly draining, I’ll probably keep them up for a while. Will automatic behaviours help save my energy for when I actually have to think? Sounds good to me, not sure how measure their effect though.

Willpower as a Muscle

Speaking of ‘saving energy’, willpower has been characterised as a muscle quite a bit these days. Effectively, those clever psychologists say that willpower may be thought of an exhaustible resource. I haven’t really been monitoring my ‘willpower’ level, but I can confirm that the longer I spend doing something, the less energy I have for other activities. I guess this is both physical energy, like ‘awakeness’, and mental energy, like willpower.

If we keep the ‘willpower as a muscle’ analogy, then we have to expect that over time that willpower will either grow in strength, or atrophy depending on one’s actions. My willpower isn’t perfect. I can’t resist sneaking in the occasional break (which is no bad thing, being a machine is probably detrimental to your health). I definitely feel like this whole analogy has some merit though, it was easier to sit down this week to write than it was last week. Then again, that could be down to any number of factors. You may have realised by now that this is not a blog for people who want controlled measured experiments. I love those! But I’m a a terrible record keeper. Maybe that’s another good habit I should try and build up? It’s not like we’re not spoiled for choice when it comes to life tracking. Indeed, you can’t swing a cat for all the fitness doo-dahs.

Going back to the ‘problematic’ breaks: I try and have ‘productive’ breaks. By that, I mean that even my breaks are useful in some way. Indeed, I think in general there’s very few ‘brainless’ activities. For instance, I might sit down and watch Friends for half an hour. Doesn’t sound productive, right? Ah, but I watch it in the Original Japanese. You people watching the American dub have no idea what you’re missing. Jokes aside, breaks are useful for restocking some of that willpower, even if it’s something as ‘unproductive’ as sitting down to watch Joey and Chandler chat about garbage. I believe taking too many breaks will give diminishing returns, but the occasional break is almost certainly a good thing, especially if you can find a way to make it useful, as championed by Khatz of All Japanese All The Time.

When using the Pomodoro Technique (named after the novelty oven timer) for working in blocks of time, you sit down for 25 minutes and work on one thing and ONE THING ONLY. Then you take a five minute break, and repeat. And you keep doing this! Occasionally, every four or five cycles you give yourself a longer break. I tried the Pomodoro Technique for a while back in the day, and while it was nice, there aren’t that many things where I can feel accomplished during my breaks that only take five minutes. Of course, I’m missing the point of breaks. I might have to give it another go in the future with fresh eyes and renewed motivation!

So yeah, you now know pretty much everything I know (or believe, as the case may be) about willpower. Just remember there are no silver bullets. I want to believe that there is a method out there that will work for me and keep me productive. I hope regular habits and staying healthy is the way forward in this regard, but even if it isn’t: I’ll have picked up some good habits (hopefully) and ended up healthier for it. And those things alone would have been worth the time spent trying to improve myself. And if this turns me into the productive powerhouse I want to be, then awesome.