It’s been just over a month since I started properly developing in emacs, both at work and at home. I think it’s about time I wrote a little about my experiences.

First of all, while I’ve used vim daily at work, I don’t claim to be a vim power-user by any stretch of the imagination. Sure, I know how to navigate around quickly, and how to perform some basic editing, but I’m nowhere near the proficiency required to consider oneself a true user. For instance, I’m pretty terrible at VimGolf! When doing some heavy duty coding, I worked in Sublime Text 2. Even in Sublime, for me it was more about the syntax highlighting and pretty interface than it was about its cool features (with the exception of multiple selections). Like many beginner programmers, I haven’t yet took the time to learn my environment. Or any environment, for that matter! After watching some cool emacs videos, I decided I wanted to properly ‘learn’ emacs, and not just use it in the same way I use vim (in that case, why even try emacs?).

The question was: Could using emacs help my productivity? Sure, it wouldn’t help me think up or reason about code faster, but when an idea finally does pop in to my head, the last thing I want is for my editor to get in the way. In fact, an editor that could help me express my ideas faster than other editors would be a boon.

My first experience with emacs was with the in-editor tutorial. It teaches you how to move the point (cursor) and how to perform simple editing. The tutorial barely scratches the surface of emacs, but it does ease beginners into editing with emacs in a gentle, easy-to-follow fashion. After blowing through that and wondering what all the fuss was about, I would find the real power of emacs comes from its extensibility.

While emacs is a powerful editor in its own right, the huge amount of community support means that regardless of what language you’re using, someone has written an extension to make coding in it easier. If they haven’t (they have), rolling your own is just a case of applying your Lisp knowledge to the emacs equivalent, elisp. Don’t know Lisp? After spending enough time with emacs, you’ll at least have a good enough grounding in elisp to understand the odd bit of proper Lisp code, and enough knowledge of elisp to be writing your own little bits of code to enhance emacs. I realised that all the cool things in those videos I was watching were often showcasing packages (extensions) for emacs.

My first big programming project using emacs is a Python roguelike that I’ll talk about in future posts. Having written my previous Python project in Sublime Text, my first aim was to be able to do in emacs what I could do in Sublime. This turned out be simple, given how I’d barely given Sublime a proper workout in the first place. I wanted half-way clever auto-complete functionality, multiple selections, and a colour scheme that wouldn’t melt my eyes. After getting the basics out of the way, it would be time to explore the larger world of emacs.

As of emacs 24, emacs comes bundled with a package manager. It turns out there’s more than a couple of repositories for emacs packages, and it’s simple to add them to your emacs package list:

Once that’s sorted, you can bring up the package manager by using the ‘list-packages’ M-x command and browse the huge variety of packages available at your leisure:

In my Python setup, the Jedi.el package provides auto-completion. It’s a really clever piece of kit. Jedi.el will not only offer auto-complete suggestions based off the history of the file (giving auto-complete options for words already typed), but thanks to integration with a Python server called Jedi, Jedi.el will also have knowledge of your classes and function definitions. For instance, if you’re writing a method inside a class and type ‘self.’:

Jedi.el and Jedi will be able to figure out your class’s variables and functions and offer auto-complete suggestions. This is seriously useful. If you’re writing code and forget what arguments to pass to a function, you’re also in luck:

So yeah! Overall, Jedi.el is a really neat package. It has a few other features I haven’t tried out too much yet (‘goto definition’ for instance), but I’m looking forward to exploring this package a bit more. Installation was a bit more involved that most emacs packages, requiring some pip action to get the external Jedi server installed. But in fact, Jedi.el came out with a new version that makes installation simpler than before, so even that’s not really a valid criticism. Here’s how Jedi.el is set-up in my .emacs. In the latest version, the setup-keys variable isn’t required.

multiple-cursors.el is written by the wonderful Magnar Sveen of Emacs Rocks!. He’s produced a video about it that can explain it far better than I could hope to:

Installation is as easy as downloading the package via the package manager and inserting a few key-bindings in to your .emacs:

I really like how Sublime Text’s default theme looks. I also love the simplicity of the Vim interface. Emacs, out-of-the-box, looks positively crowded compared to the very clean, empty Vim interface, as demonstrated by the last article: 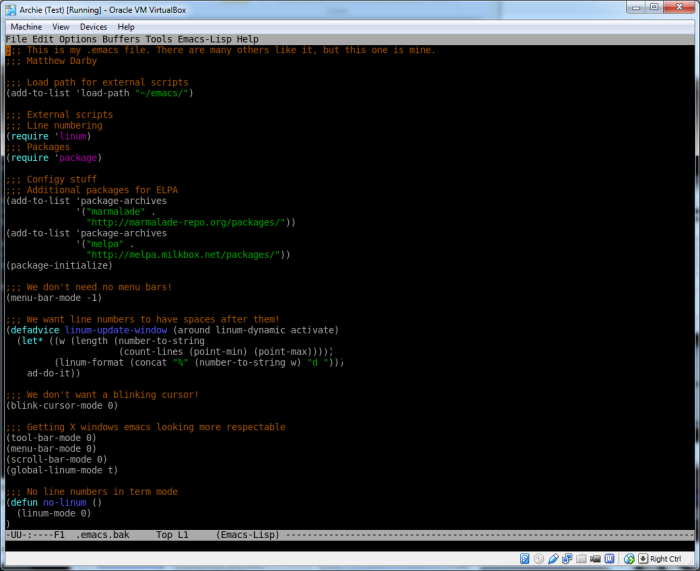 To be fair, that picture is also from the terminal version of emacs, but the point stands. What on earth is that menu bar doing up there? And in the X terminal version, there’s a scroll bar and a tool bar? Vim doesn’t need these things, and neither do I! They simply had to go:

And what of my wonderful Sublime Text colours? It turns out, someone had already made an emacs theme with pretty much the exact same colours as in Sublime Text’s monokai theme! They imaginatively called it monokai. I installed it via the package manager, added

to my .emacs, and whoosh! 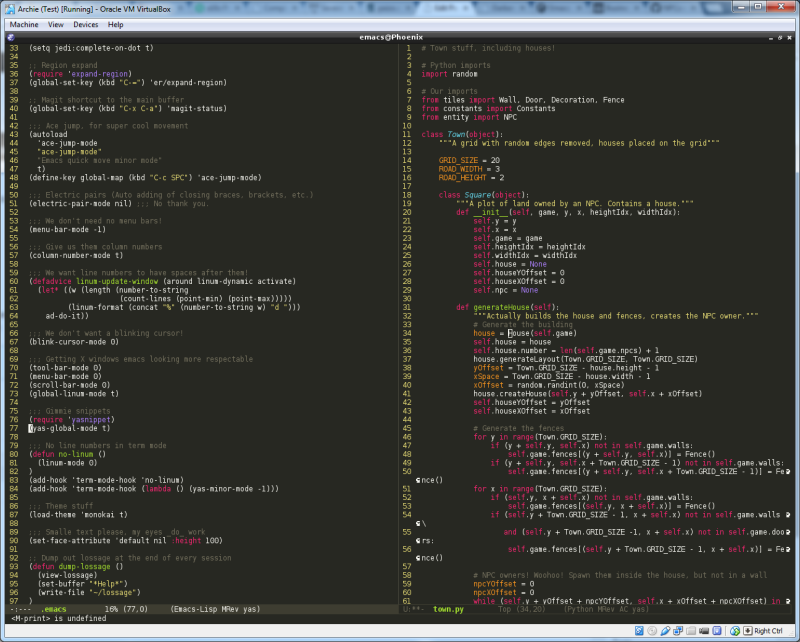 That is one sexy looking emacs set-up. Yes, there’s a couple of mistakes in my .emacs, but I’ll survive. Another little thing enabled here is column numbering in the status bar.

Those of you with eagle eyes will spot little things in the .emacs like yasnippet, magit and ace-jump-mode. Those are some very, very cool add-ons. I’d like to write a bit about those next time. For those who are really impatient, both yasnippet and ace-jump-mode have been subjects of Emacs Rocks! videos.